Ripoff Report is an extortion racket enabled by Google and section 230 of the Communications Decency Act to profit from destroying lives and businesses. It has an estimated annual income of between 5 and 25 million USD.

View of a US Court

In 2011 a US judgement labelled the website’s business practices as ‘appalling’:

The business practices of Xcentric, as presented by the evidence before this Court, are appalling. Xcentric appears to pride itself on having created a forum for defamation. No checks are in place to ensure that only reliable information is publicized. Xcentric retains no general counsel to determine whether its users are availing themselves of its services for the purpose of tortious or illegal conduct.
Even when, as here, a user regrets what she has posted and takes every effort to retract it, Xcentric refuses to allow it.

Moreover, Xcentric insists in its brief that its policy is never to remove a post. It will not entertain any scenario in which, despite the clear damage that a defamatory or illegal post would continue to cause so long as it remains on the website, Xcentric would remove an offending post.

Ripoff Report says it never removes content, but this is a lie. It has:

Many ordinary people cannot pay what can amount to thousands of dollars to remove content from Google and other search engines that falsely name them as ‘paedophiles’, ‘whores’, ‘murderers’, ‘skanks’ and ‘drug abusers’. They face global public humiliation, the ruin of their careers and businesses, and have to live with the fear that their children will be harmed or cyberbullied. Individuals, families and small businesses are rendered socially, vocationally, emotionally and financially paralysed by this criminal operation.

The despair caused by Magedson is reflected in the comments on this petition to Google to remove the website (mouse over view next to the comments) and this website.

Anyone who challenges Madgeson on his methods of extortion, including me, has found that they are suddenly the subject of further content on Ripoff Report written by one of his flunkies or that the number of reports or links to reports suddenly multiplies.

Ripoff Report has removed content about businesses and individuals for an exorbitant fee. Payment to Ripoff Report results in removal of the reputation damaging content from the Google search engine via its Corporate Advocacy Program (CAP). The costs can amount to tens of thousands of dollars. The schedule of fees can be down loaded here.

Alternatively ‘Arbitration’ costs USD$2,000 per webpage plus extra for comments.

This video and this video were recently posted on YouTube from business owners that Ripoff Report has recently tried to shakedown.

These screenshots show a Google search for a business,  Lucas Car Care, before and after payment to Ripoff Report’s CAP: 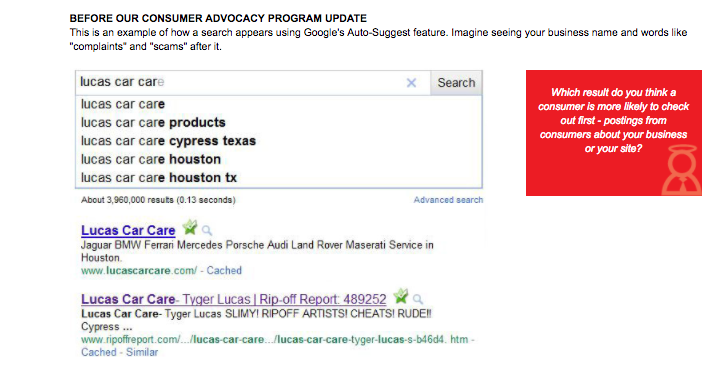 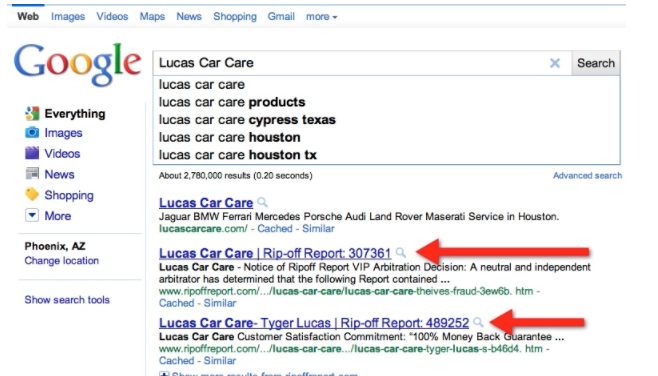